The City of Seligenstadt

Small streets, picturesque corners, colourful half-timbered buildings and impressive monuments show the different epochs of the 1900-year-old history of the city of Seligenstadt.

At Seligenstadt, the Romans built a fortress in 100 AD with about 500 soldiers. With the fall of the limes 260 AD by the attacks of German tribes, the Roman fort disappeared.

The medieval history of Seligenstadt begins with the life and work of Einhard, the confidant and biographer of Charlemagne. “Obermühlheim”, as Seligenstadt was named in the Carolingian period, was donated to him in 815 as a reward for his services. Around 830 Einhard built the Basilica, until today a famous landmark of Seligenstadt. Later he founded a Benedictine monastery, a centre of culture, with Benedictine monks spreading wisdom and learning. This Abbey was renewed in the Baroque period. In 1803, with the secularisation, the Abbey was closed and fell to the Grand Duke of Hessen-Darmstadt.

Craft and trade flourished in the Middle Ages. Today we see a lovely historic old town, with numerous, carefully restored half-timbered houses, expressive monuments and a very special character. Take your time, follow the traces of the eventful history, breathe the atmosphere of the old City of Saligunstat, the city of luck and welfare, and experience why people are able to relive history. 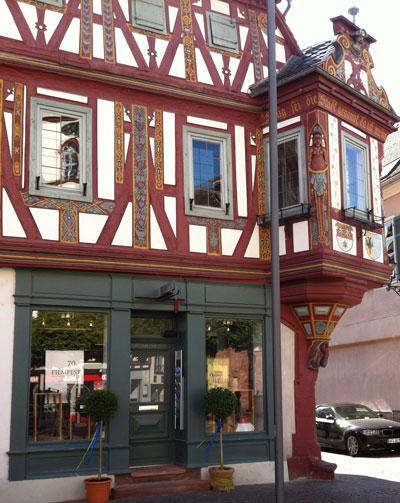 Palatinate: Imperial palace of the Hohenstaufen emperor Frederick I. Barbarossa

Embankment promenade and Cruises on the river Main